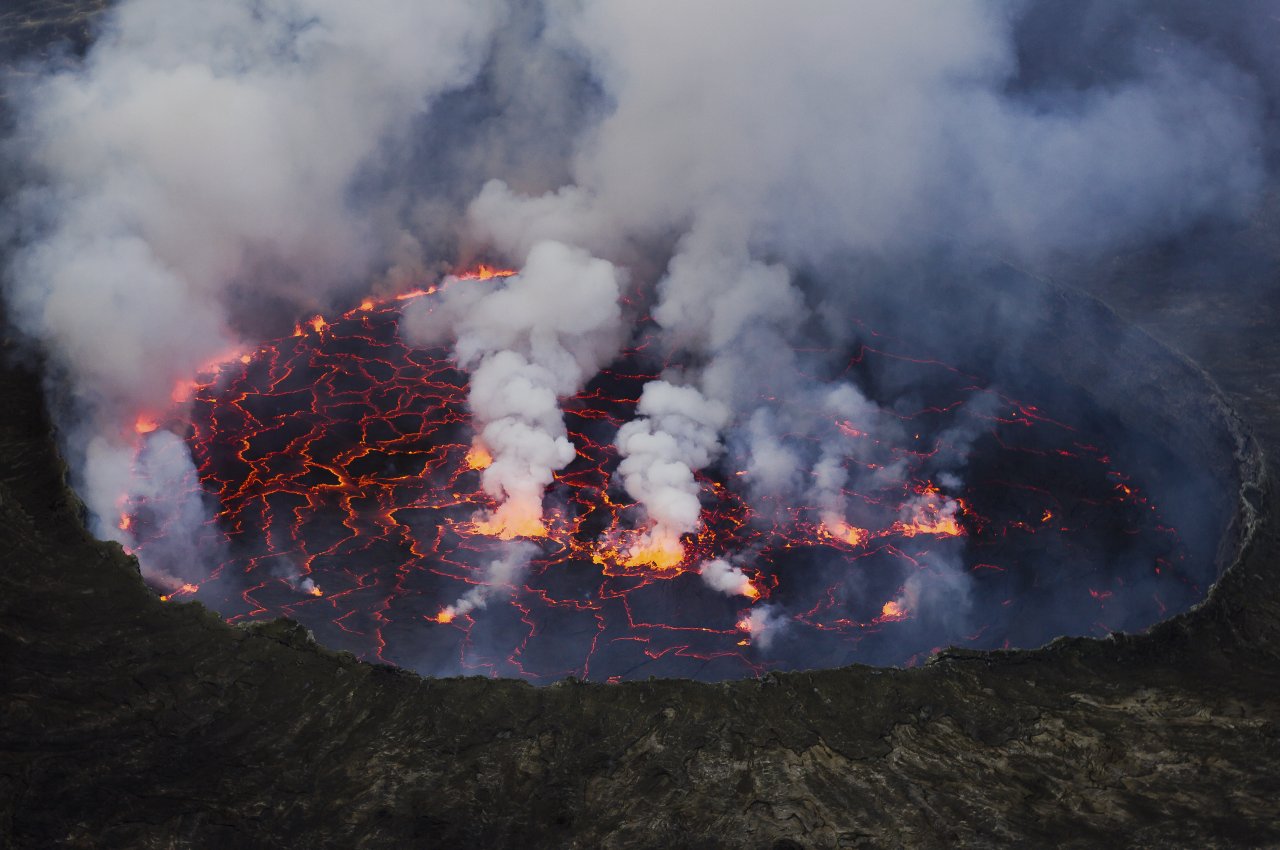 Authors: Taha A. AL-Naaymi and Mohamed A. Ali

Scoria and Pumice have been used for centuries in the world as construction materials. They are widely spread and can be found in many places around the world where volcanic activities have been occurs. Scoria and Pumice deposits are pyroclastic rocks, which are products of explosive volcanic eruptions, they are generally produced from volcanoes having a more viscous type lava.
Scoria (S) is a vesicular glassy lava rocks of Basaltic to Andesitic composition (40 – 60 % sio2) ejected from a vent during explosive eruption, the vesicular nature of Scoria is due to the escape of volcanic gases during eruption, it is typically dark gry to black in color ,mostly due to its high iron content. It is consists of highly vesicular basic material having much higher density than Pumice (Lefond, 1983; Harben, 1995; KiliÇ et al; 2009). The glassy matrix of Scoria fragments and over several million years devitrifies to products, thus it is most economically valuable Scoria deposits are late tertiary or Quaternary in age (Mathers et al; 2000).
The vesicular structure and chemical composition of Scoria and Pumice have a series of useful properties such as, low bulk density, good thermal and caustic insulation, low chemical reactivity and very porous. This combination of attributes make Scoria and Pumice suitable for several industrial and construction application, such as an additive materials (Pozzolana) in cement industry, as a heat and sound insulating materials, as a lightweight aggregate to produce lightweight concrete and in variety of other permanent insulating applications. (Failla et al; 1997) (Gunduz, 2008), in addition to other uses such as low cost, fillers, filter materials. Also Scoria is used as a roofing granules and road metal (Harben,1995) and other architectural applications and in construction industry.Pumice was used in ancient Rome over 2000 years ago and many notable Pumice structures are still standing today (Grasser and Minke,1990).

Twentieth century witnessed rapid growth in use of light construction materials which contribute to energy saving and has increasingly been gained importance naturally. The use of lightweight construction materials such as concrete has been confined to large structures, and more in particular to structures where a high dead load to live load ratio occurs ,less reinforcing steel and lower foundation costs ,furthermore the reduced weight may to reduce the risk of earthquake forces are proportional to the mass of those response (Satish and Berntsson, 2002). Reduced dynamic actions make it easier to move the elements to be connected (Yasar et al; 2003). Economic calculation shows about five to ten percent saving due to dead load and foundation size reduction (Malekpoure et al; 2010) .From economical perspective the cost of lightweight constructions materials is somewhat more .but ultimately the total building cost is less (Mijnsbergen et al; 2000).
One of the most conventional ways to manufactur lightweight concrete is to used Scoria and Pumice as a natural lightweight aggregates, as it can be found in many places around the world where volcanoes erupt. Yemen is one of the countries that have volcanic eruptions occur during Cenozoic Era to Quaternary. The volcanic rocks in Yemen have been divided in to an older “Trap” series and a younger volcanic series (Beydoun et al ;1998).
There are numerous geological studies described volcanic fields and volcanic deposits in Yemen, but few of them described Scoria and Pumice as a construction materials. Also no studies of assessment of these deposits in manufacturing lightweight concert exsit. Schulze, 1978 reconnaissance the Pumice and pumicite deposits in Dhamar – Rada area, and GEOMIN ,1985 studed construction and industrial rocks in Y.A.R., AL – Sabri, 2003 described Scoria deposits in Yemen, occurrence, uses and investment opportunities, and in 2009 he studded geology and economic potentiality of scoria deposits in Dhamar – Rada volcanic field . However this paper aims to discusse the chemical and physical properties of Scoria and Pumice deposits in Dhamar – Rada volcanic field and the assessment of this deposits in manufacturing lightweight concert.

Geological Investigation:
Volcanic rocks within the Arabian plate occur throughout the western Arabian peninsula over a south – to north distance of 3000 km ,from Yemen through Saudi Arabia ,Jordan and Syria (Al- Sabry 2009) together they are one of the world’s largest alkali volcanic provinces, with approximate area of 180,000 km2 (Mattash ,1994) .the Cenozoic – Quaternary volcanic rocks of Yemen previously divided in to an older “Trap” series and younger “Volcanic “ series (Beydoun, et al, 1998). The Yemen “Trap” series outcrops over a large area of western Yemen on the high plateau to the east of the Red sea with smaller northern area south of Sa`dah centered, with total area of 50,000km2 (Mattash ,1994) .The Yemen volcanic series cover a total area of about 9,000 km2 in more restricted and disconnected occurrences on high plateau above the Yemen Trap series ,in Marib graben and sporadically ,along the Gulf of Aden from Bab Al-Mandab in the west at the entrance of Red sea to Bir Ali area SW of Mukalla, and then again in the east in Qusayar – Sayhut area (AL-Sabry, 2009). The Yemen volcanic series includes two stages of volcanic activity (Late Miocene – lower Pliocene volcanism) and (Pliocene – Quaternary volcanism ).
The Pliocene – Quaternary volcanisms occur in variety places in Yemen, that cover a total area of about 9000 km2. It is divided to deferent fields (a) Sanaa –Amran, (b) Dhamar area, (c) (Marib area, (d) Shuqrah – Ahwar, (e) Balhaf –Bir Ali, (f) Qusayar – Sayhut, and inland. Also the volcanism in the Red sea ( Jabel At-Tair, Al-Zubari Island and Honaish Island (Beydoun et al; 1998). Quaternary volcanism in Yemen generated and developed through the post rift stage ,volcanic cones, domes, sheet and lava flows are the characteristic features of this volcanic series (Al-Khirbash and El-Anbaawy., 1996).
Dhamar – Rada’ volcanic field is located 95km SE sana’a city ( the capital of Yemen )extends to southeast of Dhamar city and spread to Radaa district ,it cover an area of approximately 2500 km2 (Fig. 1). This field is considered the newest volcanic field ,because of the presence of hottest area, such as Hamam Ali and rises of sulfur matereals and hot water from Al –Lisi and Asbil mountains .Structurally This field is heading to north west, parallel to the structural vectors construction of the Red sea and the East – West direction which show most of the craters volcanic eruptions. A variety of volcanic rocks occur in this field ,such as Rhyolite ,Ignimbrit, Obsidian, Bubble and Amygdaloidal basalt and various kinds of volcanic Tefra .The study area is characterized by the presence of Scoria Cinder, cones and explosive craters, many of the cones have horseshoe shaped morphologies reflecting either the predominant wind direction during cone building, or explosive removal of the side of the cones by directed volcanic blast (Chiesa et al;1983 ).
The moust of pumice deposits in Dhamar – Rada’ volcanic field present within acidic Quaternary volcanic series in Al – Lisi volcano, as it is located east of Dhamar city, of about 7 km, and Isbil volcano located about 31 km east of Dhamar city (Fig.1).The Pumice and Pumicite layers are located in the area around AL-Lisi volcano which cover about 15 km2 .These pyroclastic layers are generally flat or inclined up to 10° in various directions (AL-Sabry, 2009). The upper part of the section contains a pyroclastic Pumice flow and thin Pumice fall layers. In the surge deposits planar and sand wave bed –forms are presented (Chiesa et al ;1983). The Isbil volcano is the most prominent strato – volcano in the Dhamar – Rada’ volcanic field . The Pumice flow deposits occur during the latest stages of the volcanic activity. However a thick succession of Pumice – fall, surge and pyroclastic pumice – flow deposits is exposed in the upper part of the caldera wall (AL-Sabry, 2009).

Methodology:
Thirty representative samples were collected from different areas of Dhamar – Rada’ volcanic field. These samples were 15 samples for Scoria deposits and 15 samples for Pumice deposits, Table(1). Scoria samples were collected from fall–out and the local grain –avalanches down on a cones .The Pumice samples were collected from Pumice–flow deposits and pumice fall layers. The adequate quantity of each sample was collected, labeled, and the location was pointed. The samples were cleaned and prepared for analyses. The chemical analyses of the Scoria and Pumice samples were achieved using X-Ray Florescence (XRF) technique for major oxides and traditional wet –chemical analyses for loss on ignition (LoI) and the physical properties of these samples such as grain size distribution, bulk density, water absorption and porosity were tested. A thin section was prepared in the central laboratories of the Geological Survey and Mineral Resources Board in Yemen, the polarized microscope was used to study the porosity of the Scoria and Pumice using cross polarized light (C.P.). In this study ,scoria and pumice were used as both coarse and fine aggregates for assessment in the manufacturing of lightweight concrete. Other measurements were carried out in the laboratory of Faculty of Engineering in Dhamar University.

Porosity:
Pores are defined as the air space inside individual aggregate (ACI 213 R – 03). Scoria and Pumice are highly vesicular volcanic material formed by the rapid expansion of gasses during eruption of lava. The porosity of Scoria and Pumice deposits of Dhamar – Rada’ volcanic field was tested according to British standard (BS).The calculated values of porosity range between 47.3 to 56.3% for scoria with an average of 51.66%, and the porosity range between 57.3 to 66.1 % for pumice with an average of 60.65% Table(4).
In thin sections under polarized microscope ,most of the pores in scoria samples are interconnected Fig.(4,A). It is clear that the pores in scoria deposits are larger than pores in Pumice and appear with different shapes and the voids walls in scoria samples are thicker than in Pumice Fig. (4,B).The vesicles in Pumice samples are densely packed with very thin pore walls. A discrepancy between porosity measured in thin section on one hand and that measured in laboratory is thus expected (Franzson el al; 2001). In some altered scoria the vesicles are totally or partially filled with secondary minerals such as Carbonate, Quartz and possibly Zeolites (Al – sabriy 2009).

Investigation on Scoria and Pumice Deposits in Lightweight Concrete:
Concrete Mixture Composition And Sample Preparation:
The Scoria and Pumice deposits in the Dhamar- Rada’ volcanic field were used as an aggregate in the production of lightweight concrete. The Scoria and Pumice aggregate were separated in two sizes for the concrete mixes preparation of +20mm to +5mm as coarse aggregate and +2.36mm to 0 as fine aggregate.
The concrete mixtures were prepared by using Scoria and Pumice aggregate. A Scoria lightweight concrete (SLWC) mixture was made using only Scoria as an aggregate (443 g coarse aggregate and 366g fine aggregate) ,further more a Pumice lightweight concrete (PLWC) mixture was made using only Pumice as aggregate (470 g coarse aggregate and 347g fine aggregate). The combination of water to cement ratio (W/ C) was (0.5) which maintained a constant workability.
The aggregate were washed ,and then made saturated surface dry by immersing under water for 24 hours before casting of concrete .The Portland cement used in the investigation was supplied from Amran cement factory and fresh water used to mixture preparation. The test specimen were 100mm cubes as per BS 1881 – part 116 for compressive strength .All specimens were compacted by external vibration ,the specimens were removed from the moulds after 24 hours of casting and cured under water at a temperature of 23 ± 2 C° until testing at 28 days .Six cubes for compressive strength were tested at an age of 28 days and other six cubes for bulk density were tested at same time.